My son loves sports and has been involved in many of them all his life. When he started high school last year, he decided to participate in two of his favorites: Soccer and wrestling. Our school has a very competitive soccer program, and this year there were 13 seniors trying out for the Varsity team, so my son didn’t make the cut. The varsity coach told my boy he would have made the team, had there been fewer seniors. My son understood and was grateful for the encouragement from this coach. He was excited to play on the JV team this season and looks forward to hopefully making Varsity next year.

While we were on a rain delay during the season opener games, I passed the coach who stopped me to ask if my son got any sleep the previous night. I was struck by this question, giving him a confused look with an awkward laugh, telling him I think he did, but why would he ask that? The coach said he thought my son might be nervous since he was asked to play up in the Varsity game following the JV game. I immediately squealed with delight and then quickly told the coach I had no idea about this great news! Then I grew frustrated and wondered why my son wouldn’t tell me such a thing!

I returned to the stadium stands and asked my husband if he knew about our son playing in the varsity game and he said yes, but our son wanted to surprise me. I knew my boy would be sitting on the bench with the rest of the team during the varsity game because the coach asked him to be there to prepare for next year. He watches the backline, where he will take the place of a senior playing his position now. My son also knew there is a particular senior on that backline who is like a second son to me and I always stay for the varsity games to watch him play.

Back when this very special senior was my son’s age, he kept reminding me to come to that year’s season opener soccer game against our school rival. I told him I wouldn’t miss it for the world. When I arrived at the game, I saw this boy whom I adore, starting on varsity and wearing a captain band too! These are both incredible accomplishments for a sophomore and yeah, I TOTALLY freaked out with excitement and surprise! I cheered and hollered for him throughout the game, and afterward, I gave him a long tearful hug.

I texted him in ALL CAPS about how SURPRISED I was and how THRILLED I was for him and how PROUD I was that he not only STARTED ON VARSITY, BUT HE WAS THE CAPTAIN TOO??!! Then I exclaimed, “WHY DIDN’T YOU TELL ME THIS AMAZING NEWS?” And he responded, “I wanted to surprise you.” Apparently, he still remembers that exciting experience when he started on the varsity team as a captain, but also how fun it was to surprise me too.

He was the one who gave my son the idea to surprise me, so I would “freak out” just like I did with him in his first Varsity game. And when I learned of him concocting this secret plan with my son, I cried.

I cried because usually, my son hates it when I “freak out” over big things he’s done or the great efforts he’s made when it comes to anything in his life. I cried because at that moment I realized no matter how my boy reacts to my squeals of excitement and cheers of support; it might mean more to him than he lets on. I cried because an older teen, whom I love so dearly, showed my son that it’s okay to soak in all the joy and cheers from his mom and actually allow it all to matter.

And my gosh, our boys need to learn that they don’t have to be on guard all the time and act tough and detached from the people they love, just to prove their manhood. And this valuable lesson played out in those precious moments when they made this secret plan together.

I could picture this senior saying, “Hey, you should surprise your mom so she freaks out when you run onto the field to play. She totally freaked out on me the first time I played on Varsity!” And I can imagine my son being baffled by this idea, learning that this upper-classman actually thinks my over-the-top excitement and support is a good thing? My son knows I still “freak out” all the time about this older boy, as I continue to watch him play and cheer him on and give him hugs after each game. I’m sure my son thought this was awkward and weird, wishing I would stop being so crazy. But, as the idea was introduced to him, everything he once thought about my embarrassing behavior must have changed. If this senior actually likes this attention, then maybe it’s not only acceptable but worth appreciating and enjoying too.

This senior taught my son that it’s okay to be loved and celebrated in front of others. It’s actually okay to invite elaborate attention and adoration from your mother. He showed my son that even as a growing young man, it’s okay to feel the swell in their heart and the emotions that come naturally, instead of stuffing them down and manning up with a protective shield of masculine armor. This kind of vulnerability shows strength more than any dismissive eye roll or embarrassing sigh.

And this message goes beyond this sweet situation because if our teen boys have the freedom to invite and embrace moments like these, then they might, in fact, have permission to feel ALL their emotions in any situation and express them too. And not just the good feelings either. Many teen boys secretly struggle with depression, anxiety, and overwhelming insecurity, to name a few. They must be given the opportunity to sort through their emotional issues without feeling shame or humiliation and get the help they need.

I hope and pray more teen boys can receive such a liberating message they can truly live out in their own lives. It takes maturity and courage to allow their sensitive sides to show because somewhere along the way, this world told them to hide all those precious parts of who they are. Our culture closed up their hearts and stole the very essence of their humanity. That’s not okay.

But this young man gives me hope, that our teens can go against the masses and grow up to experience the authenticity of being human, one vulnerable feeling at a time.

And someday, they will learn that this makes them more of a man than any guarded, hard-hearted guy could ever be. 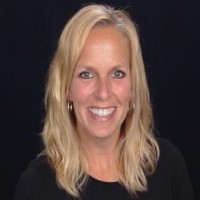 « How To Navigate The Minefields Raising Adolescent Boys