My husband and I are overweight. Some of this is genetics, and some is poor habits; but either way, we have been hyper aware of the predisposition for our children to share the same fate.

We foster body positivity in this house. Fat is never to be used as an insult, though it is not a bad word in and of itself. All bodies are good bodies. There is no shame when it comes to bodies, period.

There is no shame when it comes to bodies, period.

But we are also aware that the world is far less kind to overweight people than is our family. Having grown up a chubby child, and faced torment for it, I want to spare my kids that experience.

On the flip side, my husband was thin into adulthood before gaining weight, so we are also conscious of creating healthy habits to help our kids avoid that trap as they get older.

Until recently, we seemed to be succeeding. From birth, people have marveled at how strong our oldest son is. His doctor even verified we were not allowing him to weight lift at seven years old as he had six-pack abs, and the biceps of a body builder. Our youngest is full-on skinny. You can’t find an ounce of pudge on this child.

We figured that either we must be doing something right, or our children have managed to defy their genetics. Then last year, our now ten-year-old’s pants began to get tight. Where he used to be solid, but 100 per cent muscle, he now was still muscular, but with a distinct belly.

Objectively, he wouldn’t be considered fat. His doctor did not seem overly concerned with his weight, nor am I currently. But seeing him begin to gain weight has triggered worry in me that he could face the same health battles his father and I do.

It’s difficult to discuss this with other parents. “I’m scared my kid might get fat” when you make a career preaching body positivity seems shallow and hypocritical.

Harder still is trying to decide whether to talk to our son about it. He is aware that his clothes no longer fit, but for him it’s a frustration in being unable to dress easily in the morning. He’s a child. He is no stranger to outgrowing clothing, and very likely sees this as the natural progression of outgrowing his clothes, not realizing that the pants he has outgrown are still too long in length.

I firmly believe that unless you are a doctor and it is immediately relevant, you should not discuss someone’s weight, and that extends to children. I refuse to point out to him that he is getting a bit chubby, even under the umbrella of health. But how do I change the course so that he does not continue to gain weight disproportionately without acknowledging that it is happening?

After careful consideration, we have decided to focus on healthy habits – for both children. Healthy habits are important regardless of weight.

We started with portion sizes.

When he proclaims he is still hungry after a generous serving of pasta, instead of offering him another plate, we give him a choice of fruit, veggies, or yogurt. We have noticed him picking up on the importance of portion size and applying it on his own. When we went to a buffet last week, he told us that despite the unlimited amount of food (we had no set a limit for this rare treat) he was going to stop eating once he was no longer hungry. His dessert plate, of completely his choosing, included two sweet treats, the rest filled out with fruit.

We keep him active.

He is signed up for swimming, kick boxing, and boot camp aerobics, and loves all three. This summer, we have gone to the park, splash pad, or bike trail daily. At home, he plays basketball in the backyard or runs around with the hose.

We have an open dialogue about healthy choices, but weight is never mentioned.

The goal, explicit or implied, is to adopt a healthy lifestyle, not to lose weight or be thin. In addition to preserving a healthy body image, we hope that these skills will be more beneficial to him over time than simply seeing thin as healthy. Healthy comes in all body sizes.

If he notices his own weight gain, we will need to reevaluate how we handle that discussion. I was painfully aware I was chubby, at a much younger age than his. Perhaps we have done such a good job of normalizing different bodies, he has noticed his changing and not been bothered by it. Another reason to focus on the habits not the size.

Once we have these healthy habits firmly established, then we can work on making sure we, and he, accept him for whatever his natural body type is. The balance is hard, especially when it comes to trying to protect our children from our own demons – but it’s possible. 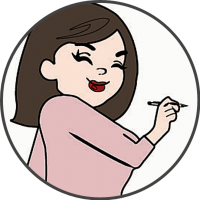 Heather M. Jones is a writer, Torontonian, and mother of two boys. When not busy writing and mothering, she enjoys spending too much time on Facebook, and trying to decode her two cats. More of her work can be found at Heather M Jones Writer

« I Didn’t Cherish Every Moment Then, But I’m Trying to Now
Ten Lessons I Want to Teach My Teens Before They Leave Home »