The day I told my girls — ages 15 and 12 — that it was unlikely their beloved Bubbie would recover was just a regular school day. They came home, grabbed a snack, and were about to “chill” (a.k.a., watch Netflix or Disney Channel) before starting their homework. I had practiced it in my head a million times. I can do this. I would tell them with grace and clarity, answer questions honestly, and wrap it up with healing maternal hugs. They’d go upstairs and get re-immersed in their tween/teen lives while I’d start dinner, proud at how I handled a tough parenting moment. And I’d hold it together for another day. Warrior Mom.

Reality held a different plan. Raw and messy. And I wouldn’t change a thing.

They’re a team. They can handle this. I started with the facts. You know how she’s been sick, but treatment has been going well? Well, something new came up…and… first came the tightness in my throat, then the stinging eyes. Um…so…they don’t think she’s going to get better. Up until now, I couldn’t meet their faces. But then I had no choice. Warrior Mom gave way to choking sobs. As I struggled to find comforting words, I saw my older daughter, my unflappable kid, tears streaming. I looked at my 12-year-old, her soulful blue eyes meeting mine as she quietly walked over to put her arms around me. No words; just sweet warm arms.

Is there ever a good time to lose a loved one? No. But the timing here felt particularly tough, as my older daughter was scheduled to take an international trip a few weeks later. Through her tears, she asked me what would happen if Bubbie died while she was away. I told her it was unlikely to go on that long. At the time, it was an honest answer.

As the weeks passed, their grandmother shocked everyone by showing improvement. In our house, we continued to plan for my daughter’s trip. Multiple runs to Target, multiple Amazon carts, endless reading — and re-reading — of the packing lists. The days leading up to her trip were busy but joyful. The night before her flight, we were both equal parts nervous and excited. And her grandmother was, miraculously, still doing ok. I assured her that going was the right thing to do and that she’d have an amazing once-in-a-lifetime experience. For a kid who had never been away from home before, I was proud of her for taking such a big step in her independence.

Five days into her trip, her grandmother took a turn for the worse and passed away. Among the hardest parts for me was that my girls — my dependable team of two — weren’t together. They couldn’t support each other. As a mother, that pain runs deep.

There is always the typical barrage of phone calls and planning when a death occurs. But I also had to call my 15-year-old overseas to tell her she would never see her Bubbie again. I texted her group leader to arrange a video call. Again, I rehearsed the words in my head. I saw her smiling, blissfully uninformed face…and promptly fell apart. Will I ever learn? As my words tumbled out, her tears were so fast and furious she began to hyperventilate. I told her to take slow, deep breaths while I struggled to find my own. The group leader popped on and gently suggested they call me back in a few minutes. I looked at my phone. One minute. Two minutes. Excruciating. At four minutes I texted back. Is she ok?? Can I talk to her now?? Back onscreen, she was surrounded by her three BFFs, sipping water. Nodding. Breathing. Calmly, I told her how the passing had been peaceful, how proud we were of her tough fight, how everyone was going to be ok. Most importantly, I told her how much her Bubbie wanted her to go on that trip, and how she’d never want her to cut it short by coming home early. And I meant it. She nodded and eked out a smile, I told her how much I loved her and that we’d check in again later.

As we texted throughout the day, she repeatedly asked when she could talk to her sister, who happened to be at a sleepover. Her sister. Her touchstone. I set up another video chat that afternoon so the three of us could see each other. I left them alone for a bit. I don’t know what was said, but when I returned they were smiling. Relieved. The band was back together.

Watching our kids go through heartbreak is never easy. Sometimes we feel actual physical pain. But if we trust ourselves, and most importantly trust them, we can get through it together. And we can come out the other side; perhaps a bit worn — but still whole. 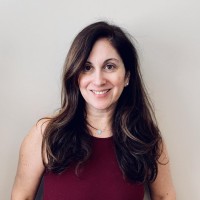 HD Rockwood is a freelance writer and PR/communications professional. Her work ranges from personal essays and blog posts to B2B/D2C marketing to politics. She lives in Upstate NY with her husband, two lovely daughters, and a couple of crazy kitties.

You may know Karen from her website Hey Sigmund, a

Spending some quality time with my mom in Arizona!

Talking about puberty can be so awkward! What do y

Do you ever wish you had a safe place to turn to?

Are you worried about your child in college? Do yo