On a balmy summer night recently, I looked over from my beach chair at the exact moment my son happened to look at me. His eyes met mine and he smiled. His reddened nose held the tell-tale signs of a day in the sun and his scruffy facial hair reminded me that he hasn’t shaved (or gone for a haircut) since the quarantine started. We were soaking up the last bits of a perfect sunset and I wanted to freeze time.

For that brief moment, I could barely see the little boy who used to build sand castles at my feet while incessantly chatting.

With his sunglasses perched on the bill of his baseball cap and his T-shirt covering the chest hair that seemingly came out of nowhere, he looked every inch of a grown man. He was relaxed and happy as he sat with me, cracking jokes and talking about the details of his life, specifically his plans for college next year.

to find out how to put an end to arguing with your teen or tween!!

He looked so grown up and it took my breath away.

As is often the case when I catch glimpses of the man he’s becoming, my eyes filled with tears.

I find myself trying to soak in every part of him so that when he’s away at college next year, I’ll have a catalog of memories to hold onto when I miss him so much it hurts.

When my son saw my tears, he groaned.

“Geez, Mah. Do you have to cry every time you realize I’m not 4-years-old anymore?”

His joke broke my reverie and he gave my shoulder a squeeze as he walked back to our beach house, presumably in search of his fourth ice cream sandwich of the day.

I didn’t answer his question about crying when I think about his childhood, though

The answer is no, son, I can’t help but fill up when I think about swimming lessons, park play dates, and Sesame Street on repeat.

Because we are six months away from his 18th birthday and I’m freaking out.

We are heading into his senior year and every decision suddenly seems final. There are AP classes and SAT scores. There are FAFSA forms and college essays. Senior pictures and the prospect of a prom date in the very near future.

Eighteen means voting rights and the ability to enlist in the military.

Eighteen means his father and I can no longer answer for him legally if he makes bad choices behind the wheel of the car or in polite society.

Eighteen feels like we are losing him to the “real world,” whatever that means.

Eighteen feels like the beacon of light the end of that proverbial parenting tunnel.

And the light I see at the end of the tunnel feels blinding some days.

I worry that we haven’t done enough to prepare him for the realities of living away from home.

In fact, I know we haven’t. But it almost seems too late now to teach him the cursive he never grasped in second grade or to expect he’ll ever make his bed (or put his laundry away, sigh).

While the feelings of loss hit me hard some days, the realization that, though our son may soon be legal in the eyes of the law, he still has a lot of growing up to do shines through, too.

Not long after our son got his driver’s license, he proudly announced that he was going to drive to our local coffee shop to grab a breakfast sandwich, simply because he could now drive.

He looked so proud of himself as he eased his car down the driveway, already looking forward to his bagel, egg, and cheese.

When he arrived home, I asked him how his trip went and he gave me a sheepish look.

“Well, the drive-thru experience was a little tricky,” he said, grinning at the memory.

“How so?” I asked, wishing I had been in the passenger seat to witness what he was about to tell me.

“Well, I pulled up to the speaker at the menu and nothing happened for a few seconds. So, I loudly yelled, ‘How does this work exactly? Do I talk first or do you?’ and for some reason, when I pulled around to the window, the woman couldn’t stop laughing. I guess it was pretty obvious that it was my first time at a drive-thru.”

When I recovered from my laughing fit, I gave him a hug and promised I wouldn’t tell a soul about his drive-thru mishap (well, except for my Facebook friends, of course).

And, when he produced a hot cup of coffee, with cream and no sugar, for me out of the bag that held his sandwich, I realized we’ve raised a young man who somehow remembers exactly how his mama likes her coffee.

Maybe eighteen isn’t going to be so bad after all. 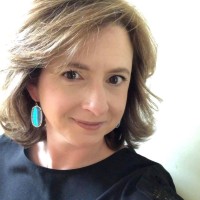 Christine Burke started the popular parenting blog, Keeper of The Fruit Loops seven years ago on a whim. Since then, her work has been featured on the Today Show, Scary Mommy, Grown and Flown, and other parenting websites. In her spare time, she runs marathons, collects thrift shop finds, and eats ice cream like it’s her job.

« Is There Ever a Good Way to Tell Your Kids Someone They Loved Has Died?
Dear Kids, Everything’s Going to be Okay »

All behavior is purposeful, meaning there is a rea

Hey Mamas - ⠀ I'm so excited to share The Moms o

Episode #4 of Moms of Tweens and Teens podcast is

Hey Mamas,⠀ Gosh, these things are so important