Celebrating the Holidays Feeling Less Than 3: <3

I grew up watching The Partridge Family, The Brady Bunch, and Eight is Enough. These were shows that had me wishing I was in a big family. Seeing all the activity going on about the house, the noise, the arguments, apologies, and togetherness looked like the kind of fun-loving atmosphere I’d want to be a part of.

I guess those shows left an impact on me because I’m an only child, and my parents were all I had growing up at home.

Three seemed enough, and I never saw solitude, independence, and imagination as issues. They were my strengths.

As time went by, I found myself motherless to Alzheimer’s and ten years later fatherless due to cancer.

While those losses were heavy enough, I began to feel the ongoing pang of loss every time a holiday appeared. New Years’, Easter, Mother’s Day, Father’s Day, yeesh, it seemed like holidays were more than I realized before.

My family of three turned to two and then to one, being only me.

I remember when my husband saw the symbol used in texting and emailing in the ’90s that was the less than symbol and the number three that would translate into the shape of a heart. I wore a tee that had that graphic on there and he saw the two symbols and jokingly said, “less than three.” That’s the way I had envisioned my life without my parents. We weren’t a family of three anymore. It was now less than three.

The shock of adjustment then stabs its way in. When that angel of death took off with one of my own, and then another, the spotlight switched from beaming over the expectations I had in seeing them again, to instead revealing new holes in my heart where the creation of more memories with my parents ended.

The next wave arrived after a few years, and I swear to you this wave had me feeling like the character Pi in the movie Life of Pi. His journey on that little boat on a large ocean had a starving and frustrated tiger named Richard Parker. Richard Parker actually represented a version of Pi’s ego but for me, as I watched the movie, Richard Parker represented loss. To be in a boat surviving alone with loss looming, attacking and feeding on precious cargo around me on a stormy ocean of feelings made celebrating holidays so challenging.

I didn’t want to celebrate.

I just wanted to close shop on any festivities. I kind of hated being invited to good friends’ homes to celebrate anything. It only emphasized that mathematical “less than” symbol. I had less than them. Even if the gesture was a loving one or out of pity or both, it still felt lonely watching the emphasis of other families having their parents, and I didn’t have mine. But that old adage, “This, too, shall pass” whispered in the halls of my sorrow and resentment. Somehow, I was going to be ok eventually.

I believe it was the third wave where light shone through the dark looming clouds in my mind that asked me to take a deeper look at the gifts of existence and celebration.

Knowing I’m alive had me realize how important it was for me to live the good life that my parents wanted and strived for me. They couldn’t continue on their journey, so I needed to take one for the team and lead that “good life” mission that they worked hard to create for me, so their efforts weren’t made in vain.

I began to feel grateful that I was alive to continue on the adventure and realized that I had the chance to celebrate with them in new ways. Life didn’t have to feel over, because it wasn’t over for me. The life I created in my time gave me a husband and a daughter, and dear friends, and clients, and community – there was so much worth in what my parents and ancestors experienced so I could have the days I’ve had. I needed to make the most of it, and keep my love and gratitude for them alive through my own existence. That was my new adventure, and I was going to honor that.

My view of less than three translated into the loving heart that it was intended to be.

My holidays suddenly flooded with ways to carry traditions I recalled into my world. I looked up recipes of my mom’s special dishes. I went to certain restaurants and ordered certain foods that reminded me of “that one time when we ate…” and I swirled their influences, characteristics, attributes, and messages through my intentions as the holidays came around.

Even my mom’s beloved superstitions made its entrance; she had this belief that anytime anyone says anything, and a sound followed it (the beep of the microwave completing the cooking time, a doorbell, phone ringing, etc.) then the words spoken prior to the sound were confirmed as truth. So the times when my husband paid a compliment, or my daughter said she cleaned her room, or I said I made our meal from scratch, it brought laughs and head nods when a phone notification went off, or one of our cats meowed, or the television’s pause time ran out. Our eyes would sparkle as we’d say, “See? It’s true!” My family embraced this and more than I’d imagined, it only made our home’s energy glow warmer.

Seeing the tremendous change take place from shifting my energy from loss to love, from grief to gratitude, from less than 3 to a loving heart, brought the essence of my parents back to continue living with me as I seize each day, adventuring through life’s new challenges, conflicts, and obstacles. I’ve realized, and now teach others, how to shift our feelings away from lack and toward love, seeing the importance of keeping the joys of our loved ones very much alive for others to celebrate along with us.

Like soil needing to be enriched for growth, so does our soul. Take some time out this year to recall the great contributions of someone you love, whether big or small and bring those illuminated experiences into your world in some way for the holidays and beyond. Let your happiness feel enriched having had those experiences, and extending your memory’s life expectancy even further through your own adventures.

Find Anita’s book that shares the celebration of life spent with her mother, and the love that exists after life. 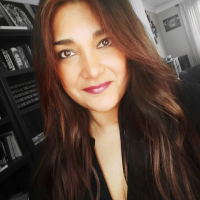 Anita Myers CPC, CRCS is an Emotional Intelligence Coach, and founder of Innerscope365, LLC. She provides specialized training programs designed to improve the inner landscape and blueprint of emotional power. She is also a published author of several books including "Hearts Do Matter", "Grateful Celebrations," and "The Undercover Superhero."

Anita's work is dedicated to redefining wellness through the engagement of emotional intelligence. She is an online social media personality and co-host of The DnA Authority, a live-streaming talk show with Dolly Cortes that focuses on the powers we have within ourselves, and the powerful resources we have within our grasp.

« 4 Ways to Foster Gratitude in Our Kids During the Holidays and Beyond
Personal Christmas Gifts for Your Hubbies! »

Mommas! I would love to hear what makes you proud

Apologizing is something I'm so guilty of! 🤦‍

Who's teaching their teen to drive?? 😅🚗 ∙

A few highlights from yesterday — Todd, Lily, an